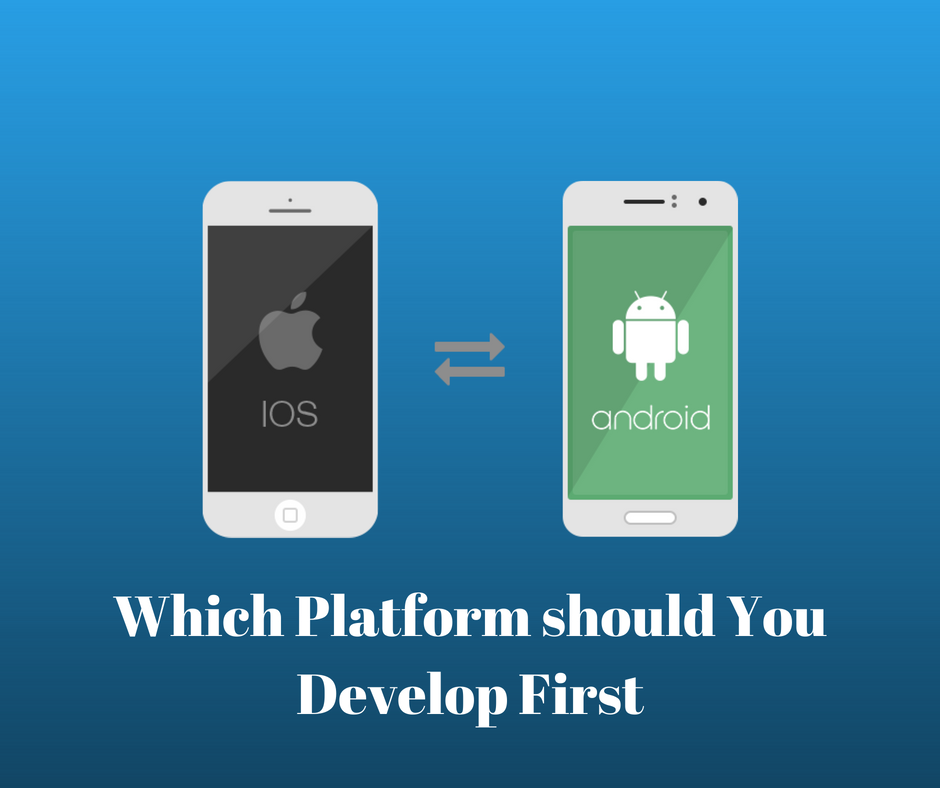 Android vs iOS: Which Platform should You Develop First

The question regarding; what app should you build first – an iOS based or an Androida one, is a big issue for the beginners. The app development requirements for different kinds of businesses, games and events are quite common these days. It is a regarding activity that can let you reach maximum number of audiences in less time.

Simultaneously it is tough task to go with a good application development and time consuming as well. At the same time, the ‘app war’ continuous to find out what app should be build.

However, you cannot always answer exactly about this question as it all depends upon the demographics for both the platforms as which platform their target market uses more will be better to choose to make mobile apps.

What should be considered

So, let’s check about some factors that would help you to decide upon what mobile app development platform you should choose for developing your first app.

You may be so excited about building your first app leaving your all worries behind and just jump up to have a fresh start. You may fail to sort out some of the detailed information about your app this way. Hence, you should keep in mind some of the details that will help you to confirm for whom the app is and what platform should you use for your new project as well.

Demographics of both the platforms

Examining demographics would let you know better to decide upon what should be done in this regard i.e. whether you should go with android app development services or iphone app application development for your business prosperity.

If you have developed the app for the global audience like a messenger app or a new web based browser, then it would be better to choose the Android platform that obtains a worldwide appeal. Or else, if you are creating an app to be used by the people in the developed nations like the US, then it is better to begin with the iOS app development, as it covers a larger hold in the market.

Due to the expensiveness in app development and maintenance process, you can hardly make few bucks from your creation. Hence, revenue models are always needed in this context.

Before proceeding further, you should have the answers for some important questions as to whether you are planning a ‘free app’ offer to your audience or want to involve the freemium model or you wish to charge for your app directly from the app store. Most of free apps are made using android application development platform and are well supported by advertising, whereas, iOS app development supports more premium apps for which the users have to pay to buy them for use.

Your staring platform gets more affected by your chosen revenue model. If you want to start with a free app and want to get it monetized later using the ad support for revenue generation, nothing is better than choosing an android app development platform. Simultaneously, if you want to charge for your app from the initial stage only, an iOS app would work better.

You can see a lot of similarity when you compare Android and iOS on the surface. Their features seem quite similar to each other. But looking a little bit of deeper, you will come to know that they have differences altogether.

iOS apps development is a little bit difficult, as you cannot get an access to some part of your operating system to include advanced features in your app. On the other hand, each android mobile app is much open.

While, as an android app developer, this can be good or bad, Android allows you to create new as well as interesting apps in a unique manner that is simply impossible with iOS platform.

Both the platforms have their similar release cycles and every year a new version of both the platform is released. Here, ends the similarity actually.

Due to its open source behavior, Android possesses many versions and flavors that are timely updated by Google. On the other hand, with the release of every new version of iOS, the developers are required to focus more on available features in the most recent version.

Wrapping up: Android vs iOS – What to Choose then

All the above factors can help you to decide upon what app you should choose first for your app development requirements. If you are still unsure of what platform to choose, just make out a list and create separate columns for android and iOS platforms. Now, write down all the features that we have discussed in this post and others if you know more and plan out to become an ‘app creator’.

If you can go with the cross platform add development methods, then it would be an added advantage for you and your business. So, just think out-of-the-box and move where your audience is. Make the best UX/UI design experiences for the users and market it appropriately to generate good revenues.